Did you know…that invisible energy centers in your home and work place are affecting your health every single day—sometimes positively, and sometimes very destructively?

Ancient cultures worldwide have always recognized the existence of special energy centers—or vortexes. These vortexes occur at specific geographical locations. Two of the most powerfully charged sites are located near Machu Picchu, Peru and Sedona, Arizona—but there are millions of smaller vortexes all over the world.

At these sites, electromagnetic subterranean currents (which can be positively or negatively charged) create spiraling energy, or funnel-shaped vortexes. Such vortexes can form from any substances that flows, such as wind…water…electricity…or raw energy.

The vortexes in Sedona are concentrated at 4 main sites, where the energy interacts with all beings that come in contact with it. As soon as you come within ½ to ¼ of a mile of one of the Sedona vortexes, you are subject to what people claim as “profound” effects on the body, mind and spirit. 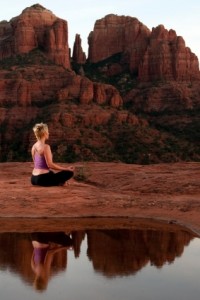 However, even if you never come in close proximity to an energy vortex site, their unseen energy lines could still be influencing your life, as explained below.

The Most Remarkable Energy on the Planet…and Its Effects

The vortexes of Sedona are said to produce some of the most remarkable energy on the planet. Visitors from myriad religious and spiritual backgrounds are drawn to Sedona to experience this energy.

The energy currents in Sedona are also called ley lines, and depending on an individual’s energetic sensitivity, one could be affected on a number of levels, including:

Although skeptics have branded ley lines as “new age” pseudoscience, it is undeniable that people who have visited the vortexes of Sedona have reported transformative visions, intense epiphanies, and potent experiences of physical healing.

How Energy Vortexes Could Damage Your Health

Giant vortexes arise from the magnetic poles of the earth—and as such, energy lines encompass the world, affecting all living things. For example, if a negative energy line runs through your garden, it can slow the growth of your plants and make them susceptible to disease…drought…and other plant problems.

Likewise, if you have recurring issues and struggles you can’t resolve, energy lines could be the cause. Perhaps your home or office is coming into continual contact with a negative energy line, and therefore manifesting difficulties such as sleeplessness…nightmares…and illnesses.

Alternately described as geopathic stress zones or interference lines, negative energy vortexes could be creating resistance in many areas of your life, including your…

Even if you are not aware of the energy fields around you, your body is highly sensitive to their impact. The resonance of energy vortexes is very similar to the subtle energy resonating at the center of every person. For this reason, unseen negative vortexes can create havoc in your life. Fortunately, your body’s natural sensitivity to energy vortexes is also your key to resolving energy-related issues.

How to Eliminate Negative Energy Vortexes—and Protect Your Health

Removing the stress of negative energy vortexes from your life will open your world to a wealth of new opportunities. One way to do this is with the age-old practice of dowsing.

In addition to detecting water, for which it is best known, dowsing can also locate and “cure” the energy in our environment. Dr. Mhairi Livingston, an immunologist and practitioner of qi gong, feng shui, and dowsing, explains that dowsing can help you tap into “the earth’s natural vibrations [that] support our immune and energy systems, our bodies, and our minds.”

Dowsing can also help you locate positive energy vortexes and thus gain the benefits of their favorable energy. Dowsing may be practiced with tools such as dowsing rods, pendulums, and wands.

The practice of dowsing also helps to identify and treat ailments, develop intuition, find lost objects, tune in to a pet’s needs—and it has nearly limitless applications.

A good resource for those interested in taking advantage of this ancient practice is Marie Diamond’s Diamond Dowsing Course, a one-of-a-kind self-study course that comes with a set of dowsing rods you can learn to use within 30 minutes—and a blueprint for curing any energetically-caused health problems.