Multinational biotechnology and agriculture giant Monsanto is just one FDA decision away from introducing an artificially produced omega 3 fatty acid. 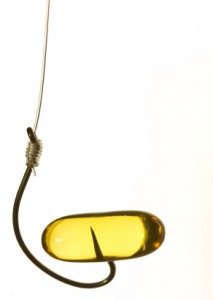 Nutritionists roundly advise Americans to consume more heart- and brain-healthy omega 3 fatty acids (found in food such as fish and nuts), but a fake version of fish oil is hardly the answer.

Two years ago, Monsanto petitioned the Food and Drug Administration to have their SDA-enriched soy oil granted the GRAS status — or generally recognized as safe. That petition noted the company’s intent “to market SDA soybean oil as a food ingredient in the United States in a variety of food products including:

That means fake fish oil posing by the name Soymega may soon be added to essentially every processed food in existence. According to Monsanto, it delivers health benefits comparable to those garnered from natural sources of omega-3s. Given Monsanto’s bad reputation of being the most devilish, over-sized, greedy, and disproportionately powerful corporation in the world, their claim is dubious at best. (Note: Google’s first suggested search term when one types the word Monsanto is “Monsanto evil”).

Right now, the number one source of omega-3s for most Americans is fish, a food source that’s becoming scarce, and one that’s also becoming increasingly likely to contain toxins or to be irradiated.

However, other organic sources of omega-3s other than fish are:

So, what sounds like a better way to improve your health: eating processed foods with a genetically manufactured SDA oil additive … or eating handful or two of nuts?

Fact or Myth: Can You Restore Your Memory While Sleeping?