While there’s a wealth of evidence that proves how important a balanced diet is to your physical health, scientists have only recently begun exploring the link between nutrition and mental health. A new scientific review published June 2015 in The Lancet Psychiatry calls attention to the importance of nutrition in supporting mental health. 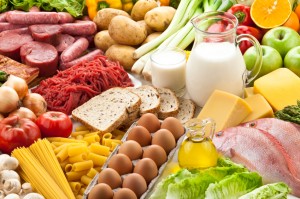 Your Brain Depends on Nutrients

Since its inception in 2013, the International Society for Nutritional Psychiatry Research (ISNPR) has sought out nutritional remedies for the treatment and prevention of mental disorders. Lecturer of Psychiatry Vicent Balanzá, also a psychiatrist at La Fe University Hospital, explains: “nutrition has become a key factor for the high prevalence and incidence of very frequent mental diseases, such as depression. A balanced diet is as important in psychiatry as it is in other medical specialties such as cardiology or endocrinology.”

ISNPR’s latest review found that the human brain depends upon sufficient consumption of essential vitamins and minerals, and a deficiency in nutrients like omega-3s, amino acids, B12, folate, vitamin D, zinc, magnesium, or iron could have a drastic effect on mental health. ISNPR scientists call for a more comprehensive treatment protocol that includes nutritional factors as well as more traditional therapies.

Research has shown that what you eat plays a significant role in the development, severity, and duration of depression. Poor eating habits, like lack of appetite, frequently skipping meals, and regularly giving in to your sweet tooth, seem to be the same before the onset of depression and during a depressive episode. Research has also shown that depressed patients tend to be deficient in key vitamins and minerals like omega-3s. A study published in Nutrition Journal showed that supplementation with amino acids reduced the symptoms of depression because amino acids easily convert into feel-good hormones like serotonin and dopamine. These results suggest that a nutrient deficiency may have been a driving factor in the patients’ depression. Other studies in both humans and animals have linked zinc deficiency to depression.

Although the link between nutrition and mental health is a recent one, studies are demonstrating consistent results thus far. A 2011 analysis made up of 5,000 Norwegians revealed that people who ate a diet of meat and vegetables had lower rates of anxiety, depression, and bipolar disease than those who ate a Western diet of processed foods, and even those subsisting on a diet of tofu and salads. Whether it’s meat and veggies, or a Mediterranean diet, one of the keys to optimal mental health is eating whole, unprocessed, nutrient-rich foods.